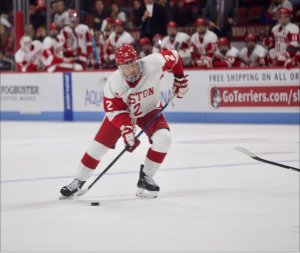 In the second half of a two-game series at Agganis Arena, the Boston University men’s hockey team was knocked off by a strong third period from the Northern Michigan Wildcats.

“The lessons…learned this weekend will go a long way this season,” said BU senior forward and captain Patrick Curry.

Before the puck was dropped, sophomore goaltender Vinnie Purpura was named the starter in net for BU (1-1-1), replacing graduate transfer Sam Tucker to make his first appearance of 2019-20.

“It’s a competition,” said BU head coach Albie O’Connell about the status of the goaltender position. “Vinnie deserved a turn.”

Taking a feed from freshman defenseman Dom Fensore, the assistant captain did the rest, finding a soft spot in the Wildcat defense and whipping one top shelf to give BU the lead.

“A lot of [freshmen] are contributing at a high level,” said O’Connell about the dynamic Fensore and his fellow first-year Terriers.

After surviving a penalty halfway through the opening frame, BU would surrender an equalizer when NMU senior forward Darien Craighead took a faceoff win and fired one through Purpura’s five-hole to level the score.

BU’s top line came close to regaining the lead late, but it was the visitors who took the 2-1 advantage with just under two minutes to play in the period.

On a quick rush into the Terrier zone, sophomore forward Vincent De Mey picked up a drop pass and shoveled a wrister from long range that found its way into the back of the net.

With a few chances on the man advantage to conclude the period, BU would hit the first intermission holding a 9-8 lead in shots on goal, but trailing 2-1.

Sophomore forward and assistant captain Logan Cockerill would leave the game with an injury towards the end of the first period, and did not return.

“It wasn’t helpful to lose a guy early…but we’re not here to make excuses,” O’Connell said.

The Wildcats began the second frame on the front foot until BU’s red-hot captain made his mark just past the period’s halfway point.

After jarring the puck loose with a hit earlier in the shift, Patrick Curry got to the goalmouth and tipped in a long drive by Fensore to notch his fourth goal of the young season.

“I just think I’ve been putting myself in the right places at the right times,” said the captain on his three-game goal streak.

NMU freshman Hank Sorenson earned himself a game misconduct with a five-minute major penalty shortly after Curry’s tally, but BU could not capitalize.

Level at two, BU and NMU headed to the second break with the hosts still narrowly ahead in shots on goal, 20-19.

It was an impressive middle 20 minutes for the keeper Purpura, who made 12 stops; the most of any BU keeper in a single period thus far this season.

The Wildcats would eventually get past Purpura again two minutes into the third period, when Griffin Loughran was left unmarked at the left post and made no mistake on the tap-in finish.

In order to prevent future defensive breakdowns, Curry said “[it’s about] making sure that we’re committed to playing team defense and everyone’s on the same page.”

At the 6:21 mark, BU graduate forward Alex Brink was ejected for a hit along the boards. During the ensuing five-minute major, Vincent De Mey cashed in with a rocket for his second goal of the game.

“Our penalty kill is something that we need to work on,” said Curry, a core member of BU’s special teams group.

Trying to mount a comeback, the Terriers would claw one back with 2:07 to play when freshman forward Trevor Zegras potted his first collegiate goal.

Sophomore forward Jake Wise had the first crack at Kent in net after the pass from Harper, and Wise’s rebound fell to Zegras, who buried it from a tricky angle to keep the Terriers alive.

“He’s gotta shoot the puck more, because he can score,” said Coach O’Connell, who already loves what he sees from the top-ten draft pick.

Tight offsides calls would prevent BU from finding a rhythm with Purpura pulled in the final moments, and by the time the Terriers could set up a six-man attack, it was too little too late.

NMU would hold on for the 4-3 win, concluding their trip to Boston with the lone victory of the hard-fought series after game one ended in a 4-4 tie.

“We’ve scored seven, we’ve scored four, and we’ve scored three,” recounted O’Connell from BU’s three games this season. “If you told me that at the beginning of the year, I would have thought [we’d be] better than 1-1-1.”

The Terriers will look to bounce back next weekend when they travel to UMass Lowell on Friday, and return home to face UNH on Saturday.