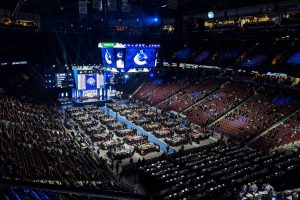 It would be hard to find a Terrier recruit class in recent memory that has garnered more praise and attention than this year’s freshmen. Entering the 2019-20 season, 11 freshmen have joined the squad, six of whom were selected in this year’s National Hockey League Entry Draft.

The Terriers welcome a balanced group of rookies, including six forwards, four defensemen and the versatile John Copeland, who stands at 6 feet 6 inches and can slot in at both forward and defense. With such a rookie presence across the depth chart, these Terrier youngsters will be relied on to be key contributors on both ends.

BU head coach Albie O’Connell said it doesn’t matter that the team is young, as they all can play well.

“It’s just [about] our ability to get them to play the right way,” O’Connell said, “to play as a group and to give us a chance to be there at the end.”

Forward Trevor Zegras, who was BU’s earliest draft pick at ninth overall to the Anaheim Ducks, headlines the incoming crop of attackers.

“The draft was really cool,” Zegras said. “I’ve been looking forward to that my whole life. But you have to put that behind you pretty quickly, because at the end of the day it doesn’t really matter, [whether you’re] one or the seventh round, you kind of all end up in the same pot. So It’s pretty exciting having such a big class — it’s basically half the team.”

The highly-skilled forward has already captured the attention of his teammates with his creative style of play on the ice, especially his projected linemates, senior captain Patrick Curry and junior assistant captain Patrick Harper.

“He’s on our line,” Curry said. “It’s exciting to work with him everyday and see the the mindset he brings.”

Robert Mastrisimone will also play a critical role in the Terrier attack as the Detroit Red Wings’ 54th-overall pick, along with his fellow future Red Wing and third-round pick Ethan Phillips, plus Jamie Armstrong, Markus Bogaslavsky and Sam Stevens, all who bring impressive resumes to Commonwealth Avenue.

Based on what he has seen so far, assistant captain and junior forward Logan Cockerill said he has been impressed by the new additions up front.

“We have a lot of very skilled incoming freshmen —  Trevor Zegras, Ethan Phillips, [Robert] Mastrosimone, basically everybody,” Cockerill said. “It seems like they’re really competitive kids and they want to win, which is what we’re looking for out of our younger guys.”

The defensive recruits will be highlighted by Alex Vlasic, who went 43rd overall to his hometown Chicago Blackhawks. Vlasic is the biggest Terrier on the 2019-20 roster and O’Connell said he already likes what he sees from the 18-year-old.

“Vlasic gives us a different look at [six-feet-six-inches],” O’Connell said. “He can be 10 feet away from a guy and have a stick on [him].”

Domenick Fensore and Case McCarthy will also patrol the BU blueline as second and third round selections respectively. Sean Driscoll rounds out the new guys on the back end as one of three freshmen blueliners who are listed at more than 6-feet-tall and over 180 pounds.

“He’s like a football player on skates,” O’Connell said.

As the leader of the defensive ranks, junior assistant captain Cam Crotty said he is excited about the early returns from this group.

The expectations are certainly high for the class of 2023, and as a former highly-touted recruit himself, Harper understands the position these young men are in.

“I think all those guys have come in for a reason, they’ve been recruited for a reason, and they’re all playing towards their strengths,” Harper said. “We’re just trying to build that pro mindset within our locker room that it’s time to take care of business.”

Curry said it was important to make sure the players understand the importance of staying in the moment and building a winning culture.

“That will last for the rest of their time here,” Curry said.

Like Curry and Harper, Cockerill said he knows that the team’s success will depend on the freshmen adjusting to Division I hockey, keeping in mind that practices and scrimmages are not the same as in-game action.

“We’ve only been able to scrimmage each other a couple times,” Cockerill said. “Hopefully they can get adjusted to college hockey as quickly as possible.”

As they look to adapt to D1 hockey, the Terrier rookies do have the benefit of the connections they developed before coming to Boston. The majority of BU’s freshmen hail from either the United States National Development Team Program or the United States Hockey League.

“Throughout the years, I’ve played with or against most of the other guys in the class,” Zegras said. “A lot of guys are coming from the USHL, so [we’re] used to seeing [each other] on a regular basis.”

In fact, Zegras’ bond with one freshman in particular goes back to their childhoods.

“Dom [Fensore] and I actually grew up playing together, so I’ve known him since we were pretty young,” the Bedford, New York native said.

With 11 first-years on the team for the first time in fifteen seasons, O’Connell said he anticipates some inevitable growing pains that would be expected to accompany such a young group and knows what it will take to counteract them.

“We’re going to make mistakes, but we just want to make sure we give our guys confidence,” the second-year bench boss said. “The key for us as coaches is to keep their confidence up because if guys waiver with confidence, obviously their game suffers.”

With the regular season just days away, the freshmen are as ready to go as anyone. These young Terriers are hungry for the chance to make a strong first impression in the scarlet and white when they travel to Union for their collegiate debut.

“I think it’s been a while since a lot of us have played our last game,” Zegras said. “We’ve been practicing for a while, so we’re excited to get out there as a group and just get it going.