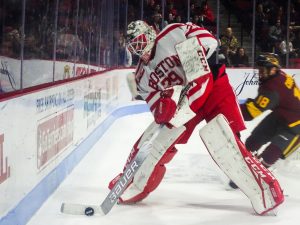 For the past three seasons, the Terrier crease has been occupied by 17-time Hockey East Top Performer Jake Oettinger. However, with the Minnesota native’s departure to the Dallas Stars’ system following the 2018-19 campaign, one of the positions of least concern for the Terriers in recent years has become one of slight uncertainty for the BU faithful ahead of 2019-20.

Among the three goaltenders on the Terrier roster, only sophomore Vinnie Purpura has experience between the pipes for BU, having appeared in a mere four contests as a midseason addition last January. Providing experience among the netminder ranks this season is graduate student Sam Tucker, who comes to Boston having appeared in 54 games over four years for the Yale Bulldogs.

With an underclassman and grad transfer tasked with backstopping the men in scarlet and white, it may take some time for the patrons of Agganis Arena to get acquainted with the new goaltending tandem. However, though the names may be unfamiliar, early indications suggest that this pair could quickly earn the trust of Terrier Nation.

While Purpura and Tucker may both battle for the same spot in the lineup, these goalies enter the season at very different points in their collegiate careers. For the 20-year-old Purpura, set to begin his first full season with the team, the introduction of Tucker provides an veteran mentor, which could greatly aid the young keeper’s development.

“I learn a lot from him,” said the sophomore of his new goaltending partner. “[His presence is] definitely good for me and my learning curve.”

For Tucker, being the second oldest player on the team — only younger than fellow graduate transfer Alex Brink — has given him a natural leadership role for Purpura and the other growing Terriers; a role which he has embraced.

“[I want to] do whatever I can to help the team win,” Tucker said. “We have a strong leadership foundation and I hope to contribute to that.”

As is the case for any position, there is only so much ice time to distribute among the capable candidates. Making the choice all the more challenging are the statistics behind each netminder’s play. In NCAA Division I competition, Purpura has posted a .911 save percentage, while Tucker’s career mark is marginally inferior at .903.

It should also be noted that Tucker is coming off a senior season at Yale University where he posted a career-best .917 save percentage.

For O’Connell, it may very well come down to who has the hot hand.

Ultimately, the most important stat to keepers and coaches alike is the number of wins. In a program with the reputation and expectations that Boston University carries, these goaltenders know that the bar has been set high. They may be relatively new to the program, but these netminders are determined to answer the bell and find success in the BU net.

“We want to win a lot of hockey games,” Purpura said.

Echoing his goalkeeping partner, Tucker added, “I want us to be able to compete for championships.”