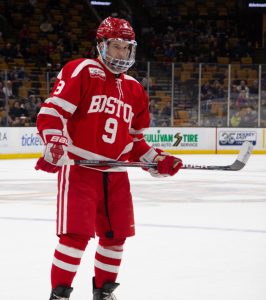 There are plenty of holes to fill among the BU-attacking ranks. The Terriers have lost five of their seven top goal scorers from last season, including now-Philadelphia Flyer Joel Farabee, who was named the National Rookie of the Year after posting a team-leading 17 goals and 36 points in his freshman season playing on Commonwealth Avenue.

With the departure of several names that had previously filled BU’s box scores, the Terriers will need contributions from familiar faces and new additions, young and old. That said, there is reason to believe this new-look forward group can get it done on the offensive end in 2019-20.

Assistant captain and junior forward Logan Cockerill said he thinks the offense will be successful this season.

“It looks like we’re going to be pretty explosive offensively and should be able to score a lot of goals,” Cockerill said.

The three-year Terrier has a point: BU’s recent attacking additions bring with them a total of 118 goals in all competitions through the 2018-19 season, with 112 provided by the freshman class.

This is certainly an encouraging sign towards to the future of the BU offense, but the young Terriers know that they will have to find another gear in order to replicate their success at the collegiate level.

“Everyone seems really welcoming of [the hard-working mentality],” Harper said.

A year removed from donning scarlet and white for the first time themselves, the sophomore class of forwards is poised to make a bigger impact in year two.

BU head coach Albie O’Connell pointed to Jake Wise in particular as a sophomore set to make a positive return after seeing his freshman season cut short due to an injury just 12 games in.

“We have a lot of guys who went through some freshman [year] ups and downs,” O’Connell said.

On the other end of the spectrum is Alex Brink, a graduate student joining the forward group after skating in 95 games for Brown University. At 25-years-old, Brink is seven years older than five 18-year-old Terrier freshmen.

“He could be like a very old brother of half our team,” O’Connell said. “He’s a man.”

The 6-foot, 200-pound Brink will bring some size to a list of BU forwards that is relatively limited in that department: only half of the 16 forwards stand over 6 feet tall. However, the Terriers believe other strengths can make up for the pedestrian physical attributes.

“We’re looking to be able to use our speed and our skating,” Cockerill said.

Not to be forgotten, BU return three seniors and three juniors to their 2019-20 attacking lineup. Senior forward and captain Patrick Curry led all current Terriers with 26 points last year, with Harper’s 20 close behind. The junior forward duo of Cockerill and Ty Amonte also cracked the double-digit point mark in 2018-19, among the seven returning Terriers to do so.

Last season, BU finished fifth in Hockey East with 2.61 goals per game, their lowest total since the 2013-14 campaign. With proven veteran leaders mixed with a new core of hungry youngsters, this Terrier attack is ready to make BU the offensive powerhouse of years past.

On behalf of the team, Harper said, “we’re all looking forward to getting things started here.”