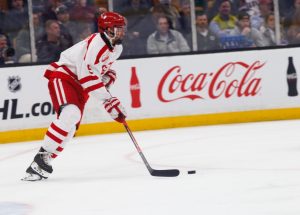 As the Boston University men’s hockey team gears up for a new season, all notes from the team indicate that the least of their concerns is their defense.

Since the end of last season, the Terriers have lost some of their best players on the back end such as defensemen Dante Fabbro and Chad Krys in addition to goaltender Jake Oettinger. However, they are finding an immense amount of depth and talent among their new defensive ranks.

“[We have] three defensemen returning who have played a lot of minutes,” O’Connell said, “four who played in the game last year in the semifinals.”

Leading the defense this year is junior assistant captain Cam Crotty. The third-year Terrier said he has made setting a good example one of his top priorities.

“I’ve always thought of myself as a leader: I guess the only big difference is there is a little more recognition,” Crotty said. “I’m going to try to do my best this year and pave the way for the underclassmen.”

O’Connell describes his blueliners as “big and mobile.” Beyond the physical traits, he believes the Terriers have the right mix of players for any given situation.

“There are differences in terms of roles,” Crotty, who has labeled himself as a more defense-focused player, said. “If we are down by a goal and we need some more offense, then some other guys will be getting the nod to play a little more. In games when we need to shut some guys down, then other guys will get the nod.”

Alongside Crotty, the Terriers are expecting big things out of other returners such as junior Kasper Kotkansalo, junior David Farrance and sophomore Hugo Blixt, all of whom have played meaningful minutes for BU in the past.

The group of freshmen, however, is the part of the depth chart the Terriers are most excited about, O’connell and Crotty shared. BU welcomed four solid defensemen in: Alex Vlasic, Case McCarthy, Domenick Fensore, Sean Driscoll and two-way man John Copeland.

According to Crotty, with the way things are shaping up, the Terriers believe there is no significant drop-off from line to line, which can be a major plus for this defensive group. If they can deliver on their preseason expectations, these blueliners could just be the backbone of the 2019-20 season.

When asked to choose a greatest strength of his team, O’Connell said he liked the way his defensive core looked and said he believed it will be very competitive.

“I think we’ll be a lot deeper there than we were last year,” he said.