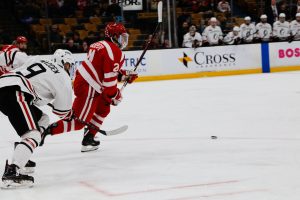 This fall, the Boston Hockey Blog turns 10. It has been a decade since a few student writers with an interest in hockey opened this blog in September of 2009, with Jack Parker’s Terriers just months removed from a historic 2008-09 campaign that saw BU sweep the Beanpot, the Hockey East tournament and the NCAA Championship.

In the last 10 years, our blog has covered 202 Terrier wins, nine playoff runs, eight winning seasons, five national tournament appearances, two hockey east titles and one Frozen Four final. In that time, we have grown to serve thousands of hockey fans on Twitter, on our website and on our live blogs during games.

This blog has seen a lot of success and it has seen a lot of change. In addition to BU men’s hockey, we have also featured coverage of the women’s team and the Boston Bruins at times throughout our existence. The blog will continue to adapt over time and we are confident that such changes will help keep our content fresh and exciting.

Just as BU men’s hockey has seen the passing of the torch between three head coaches since 2009, leadership of the Boston Hockey Blog has exchanged hands multiple times as well. As the current director, I am confident that we have put together a hockey staff comprised of talented, passionate writers who eagerly await the start of this new season.

Whether you have been with us for all 10 years or are just now hearing about the Boston Hockey Blog for the first time, we couldn’t be more excited to have you join us for the upcoming season. The interactions we have with our readers are what make this blog so special and we hope you feel the same way. We couldn’t do this without you.

It’s that time of year again: hockey season has returned to Commonwealth Avenue. It’s a big season for the Terriers, as a core of hungry veterans welcome a class of impressive freshmen, all bringing plenty of talent and tenacity to the scarlet and white.

We have big plans for this year, including integrating new forms of content to our blog and implementing more women’s hockey coverage than in years past. As always, we will constantly seek to provide high-quality coverage of the sport, the players, and the teams we all love.

Thanks for being here. We can’t wait to get started.