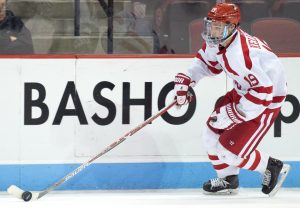 The event, which was hosted by emcee Dan Roche, included awards for the 2016-17 season, and several BU players earned plaudits.

Clayton Keller, named @hockey_east Rookie of the Year: "I'm humbled and honored to win this award. It's something I was working for."