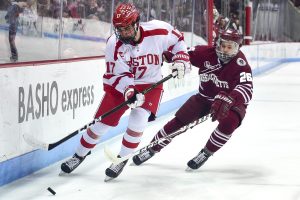 A three-point night from freshman forward Clayton Keller was the difference on Friday, as the No. 3 Boston University men’s hockey team skated past the University of Massachusetts at home.

The final scoreline was 3-1 in favor of the Terriers, with the Arizona Coyotes first rounder snagging a goal and two assists. Dante Fabbro, a freshman defenseman, had himself a game, too, pitching in a goal and an assist.

Bobo Carpenter, who now has 10 goals on the year, potted the third tally midway through the third period. The sophomore winger was a continual threat all night long, tying Keller’s team-high seven shots on goal.

For a full account of the game’s events, check out Jonathan’s recap over on The Daily Free Press.

Perhaps most importantly of all, the win assured BU heads into the Beanpot Tournament on a high, having won 10 of its last 12 games. The annual Boston showdown will get underway Monday at 8 p.m. against No. 8 Boston College.