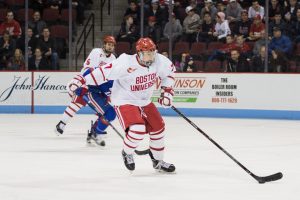 Set aside frustrations, as the sky is not falling in the land of Terrier hockey.

Pegged against No. 7 University of Massachusetts Lowell, the No. 1 Boston University’s men’s hockey team grinded its way to a 4-2 win Saturday night at Agganis Arena.

While it’s impressive enough that BU knocked off Lowell, the main storyline is that it nipped its two-game skid in the bud. The Terriers were previously swept by Merrimack College, and head coach David Quinn was visibly frustrated with his player’s mental approach.

However, thanks to 33 saves from freshman goaltender Jake Oettinger, two goals from sophomore forward Bobo Carpenter and two points from freshman forward Clayton Keller, BU returned to form. The most impressive part, arguably, was that the Terriers opted for a blue-collar approach, saying sayonara to fancy stickhandling and cute passes.

For a full recap of the game, check out Shelby’s story over on The Daily Free Press. Oettinger was stellar, too, and Jonathan wrote about his performance.

Tweets of the Game

Chabot and Curry are unreal for "afterthought" freshmen.

Guys. Quinn is actually the master of postgame quotes. It's no contest. pic.twitter.com/3EYx1QqgWk

2 thoughts on “The Look Back: BU returns to win column against UMass Lowell”