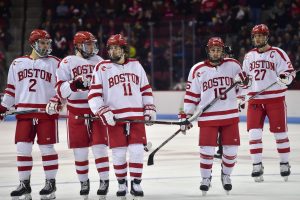 Oh how the mighty have fallen.

Call it the curse of being ranked No. 1 nationally, place all the blame on head coach David Quinn, fault a player or line – whatever suits your boat, honestly.

Friday night’s 4-1 loss at Agganis Arena came just three days after the Warriors earned a 3-1 win at their place, giving Merrimack its first-ever sweep of BU. The sky isn’t quite falling around the scarlet and white, but it’s fair to sum the series up as disheartening and concerning.

While issues persisted, one of the most concerning parts was how few Grade-A chances came Collin Delia’s way. The Merrimack netminder is by no means a bad goalie, but BU made him look like an All-Star all week.

For one, I also thought this quote from Quinn was pretty telling about how the weekend went:

Coach Quinn did not hold back in his postgame press conference following @TerrierHockey's series with @MerrimackMIH. pic.twitter.com/Zp8cU3q6Wc

2.) A story on BU’s eight-game winning streak coming to an end at Merrimack.

3.) A recap of Friday night’s demoralizing loss at Agganis.

4.) A story on Clayton Keller emerging as a bright spot amidst dark times.

Last but not least…
The highlights from tonight's historic win!#GoMack pic.twitter.com/KTqu0WwGYX

As this space normally allows, we welcome all thoughts and frustrations. The task before BU doesn’t get any easier on Saturday night, as No. 7 University of Massachusetts Lowell comes to town.

4 thoughts on “The Look Back: BU swept by Merrimack after earning No. 1 ranking”