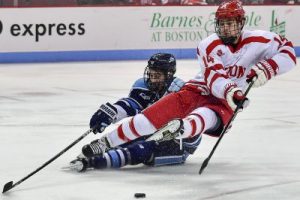 Fresh off its eighth consecutive win, the Boston University men’s hockey team will travel to Merrimack College on Tuesday night for a rare midweek clash.

Ahead of the game, however, a larger bit of news surfaced surrounding the program: the Terriers are college hockey’s newest No. 1 team.

“I pay zero attention to it,” Quinn added. “The only thing that matters is the PairWise [Rankings.]”

Doyle Somerby, BU’s captain and a senior defenseman, said the ranking is exciting, but also struck a similar chord with Quinn.

“We’re just chugging ahead,” Somerby said. “We were No. 1 a couple different times throughout my sophomore year, that national championship run, and we always seemed to slip up. A lot of the older guys here are saying, ‘Don’t even worry about it. Look ahead.’”

For a full version of this article, click here for the complete version on The Daily Free Press.