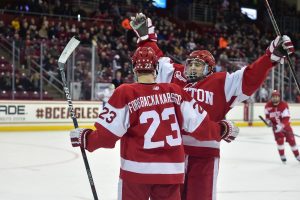 What a weekend for the No. 3 Boston University men’s hockey team.

Pegged against its archrival, No. 10 Boston College, head coach David Quinn’s side earned a 3-0 win at Conte Forum on Monday night, capping off a series sweep. The Terriers had previously beaten the Eagles, 2-1, at home on Friday night, paving the way for four vital points in the Hockey East standings.

Freshman goaltender Jake Oettinger was once again outstanding, as he posted 34 saves and made the difficult ones look routine. The defense deserves plenty of credit, too, as it limited BC’s “Grade-A” chances and ultimately silenced head coach Jerry York’s squad. For a full recap of the night’s affairs, check out Shelby’s recap over on The Daily Free Press.

A dominant storyline from Monday’s tilt was the play of freshman forward Patrick Curry. He opened the scoring on a second-period power play, and was often doing the little things right against the Eagles. For a full account of the 21-year-old winger’s night, check out Jonathan’s story over on The Daily Free Press.

With a 1-0 lead late and two power-play chances, BU iced the game via goals from sophomore forwards Jakob Forsbacka Karlsson and Bobo Carpenter. Looking ahead, BU welcomes the University of Maine to Agganis Arena on Friday night, only to travel up to Orono on Saturday night for the reverse fixture.

Tweets of the Game:

"A great win… felt like a playoff game out there. Really proud of our guys. From our goalie out, we were really thorough." – Coach Quinn pic.twitter.com/1kjB7wwSsX