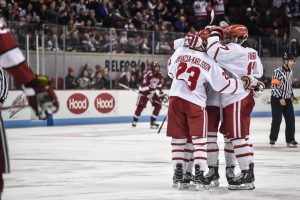 Boy does time fly by.

It feels like yesterday that the Boston University men’s hockey team got its 2016-17 season underway, but the halfway point is here. As things stand, BU is 10-5-2, sits fourth in the Pairwise rankings and sixth in the Hockey East standings.

Of course, the state of the Terriers is not that simple, so we’re here to break down some of the subtler nuances and trends that developed in the fall of 2016. It’s also important to note context, as BU entered the year with great hype and expectations, largely the byproduct of rostering 11 NHL Draft picks. The jury is still out on whether all that talent will translate into silverware of some kind.

Before we get underway, it’s important to give these two quotes from disparate parts of the semester a read through. The first came on Sept. 27 at Hockey East’s annual media day, and is from junior assistant captain Nikolas Olsson. Meanwhile, the second is from head coach David Quinn and came after BU’s 5-2 win over Yale on Dec. 13.

Quote 1: “We want to hold ourselves to our own standard, so we don’t want to pay attention to what everyone else expects us to do. We tune everything out and when we’re all in the locker room, we have a saying of, ‘Close that up and everything that’s in here matters – this is what matters, whatever is outside doesn’t.’ If we can figure out our affairs in here, then we can do great things.” – Olsson

Quote 2: “It’s been a really good first half for us. We feel our best hockey is ahead of us. It’s a great group. I love coming to the rink every day with them. They work hard, they care for each other, they’re forming some of those characteristics you need to have as a group to win important games in late March and April. We feel really good about where we’re at.” – Quinn