Boston University Athletics marketed the 2013-14 season as a “New Era” for BU Athletics. 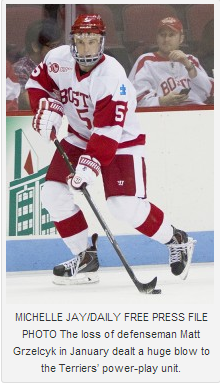 Along with other changes throughout the department, the university hired a new bench boss for its men’s hockey team for the first time in 40 years. As the new-season excitement wore off and the slogan lost its shimmer, though, it became clear that the first year of this era was going to be a transition.

The season started off well enough for the Terriers (10-21-4, 5-12-3 Hockey East) and first-year head coach David Quinn. In its opening weekend, BU defeated the University of Massachusetts and the College of the Holy Cross at Agganis Arena.

After starting its season with a 3-1 stretch at home, the Terriers took to the road. In what became a trend over the course of the year, however, BU dropped both away games — one against the University of Michigan and the other against Michigan State University. At the time, the bigger issue was that after a tight game against Michigan (18-13-4), the team derailed against Michigan State (11-18-7). The Terriers took a 1-0 lead at the end of the first period, but with five minutes left in the game, gave up three goals in what was ultimately a 3-1 loss.

Quinn showed frustration with his team after the game, calling its performance “youth hockey” and adding that the team should “be ready to practice on Tuesday.” BU took 13 penalties on the weekend and was outshot 77-46.

“Without our goaltending, God knows where we’d be right now,” Quinn said. “They’re allowing us to grow and find our way, win some hockey games in the process.”

5 thoughts on “From the FreeP: Men’s hockey stumbles in transitional season”