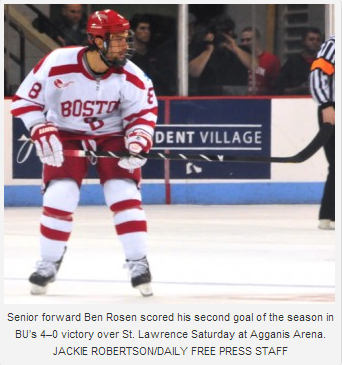 The St. Lawrence University men’s hockey team has relied on star players, namely forwards Kyle Flanagan and Greg Carey, to create most of its offense during the 2012–13 season. When the Saints marched into Agganis Arena Saturday night, it was only fitting that it was No. 10 Boston University’s depth forwards that propelled the Terriers to a 4–0 victory.

BU’s (7–4–0, 5–3–0 Hockey East) third and fourth lines matched up against Flanagan and Carey frequently because of the way St. Lawrence (6–4–2) sent out its four lines. SLU coach Greg Carvel played his top three lines in order and mixed in his fourth line every other time through the cycle, creating some tough matchups for BU.

“Our third and fourth lines were out there against their top two lines a lot, and they played extremely well defensively,” said BU coach Jack Parker.

Flanagan and Carey were limited to a combined four shots on goal and a minus-4 rating in the contest, in part thanks to the efforts of the bottom two lines. Senior forward Ben Rosen said the team’s communication and awareness was key to holding the dynamic duo without a point.

“Coach [Parker] looks to our line always as a big defensive line with [senior forward Ryan] Santana and I,” Rosen said. “We know as a fourth line that we have to be responsible and play defensive and we have to shut down their line.

“We were doing it and doing it, and I think Coach kept responding to that so it worked out well for us.”