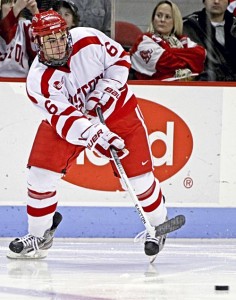 BURLINGTON, Vt. — The No. 5/6 Boston University men’s hockey team was less than two minutes away from a loss to the University of Vermont that could have hurt its chance at home ice in the Hockey East playoffs, its seeding for the NCAA tournament and its overall morale heading into the last weekend of the regular season.

Instead, junior forward Wade Megan scored a 6-on-5 goal to send the game to overtime and freshman defenseman Alexx Privitera scored the game-winner in his first weekend back from injury in BU’s 3-2 win.

After winning handily on Friday, the Terriers were caught back on their heels a few times in the first period by a more aggressive Vermont team than they’d seen the night before. Catamount winger Connor Brickley struck first, picking off an attempted BU breakout pass from the corner and firing a quick shot on senior goalie Kieran Millan that found the five-hole.

“Maybe it’s human nature – maybe you think it’s going to be easy because the night before you won, but it’s almost always the same,” said BU coach Jack Parker. “The team that gets whacked comes back and plays harder the next night, and the team that wins thinks, ‘We don’t have to play quite as hard.’”

BU had a few up-ice rushes broken up by Vermont defenders in the next several minutes before red shirt freshman forward Yasin Cissé was called for a hit from behind.