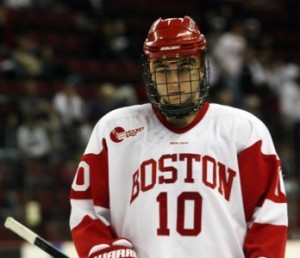 Photo is a DFP file photo by Amanda Swinhart/DFP Staff

Corey Trivino – the Boston University Hockey team’s star forward who was dismissed from the team Monday after criminal charges stemming from an arrest Sunday night – has a history of alcohol-related problems, according to BU hockey coach Jack Parker.

In a phone interview with the Daily Free Press on Monday, Parker said this is the fourth alcohol-related incident the 21-year-old Trivino has been punished by the team for in his three-plus years at BU.

These incidents are due to what Parker believes is a serious drinking problem.

“There is no question in my mind it’s an alcohol problem,” Parker said. “I did [ask him to get treatment], but he didn’t think it was for him.”

Parker’s comments come one day after Trivino was arraigned on three counts of indecent assault and battery on a person over 14, one count of assault to rape, and three counts of breaking and entering in the nighttime for felony, according to criminal dockets obtained from Brighton District Court.

Trivino pleaded not guilty to all charges at his arraignment on Monday. He was kicked off the team that same day.

“Corey knew exactly where he stood,” Parker said. “It’s sad but it’s simple for me. Corey knew in September that if he had another alcohol-related incident on campus or off campus, he would be gone from the team.

The incident leading to Trivino’s arrest occurred Sunday night before 11 p.m. Parker said Trivino was watching the Patriots game earlier Sunday afternoon with some teammates. They were together for a while before a few of Trivino’s teammates put him to bed because he was so drunk, Parker said.

According to the narrative in the BU Police Department report, given to the Daily Free Press by Brighton District Court, Trivino first made contact with the victim when she asked individuals who were rowdy in a room to quiet down.

Parker said he believed Trivino was alone at the time of the incident and said he had not heard from residence life about a complaint involving any issue with other team members.

Trivino allegedly forced his way into the room of the victim and forcibly kissed and groped her, according to the BUPD report.

Parker was alerted of the incident around 1 a.m. on Monday morning, at which point he called an attorney to ensure Trivino would be represented in court later that day. He also spoke with Trivino’s parents and then with Trivino himself, at which point Parker told Trivino he was off the team, the coach said.

“I knew as soon as they called me that Corey Trivino was no longer on the BU hockey team,” Parker said. “I told him before in September. I told him then, ‘The good news is, I’m not going to do anything about that incident,’ which is minor compared to this one. ‘But here’s the bad news,’ I said. ‘Next time, I’m going to kick you off the team for good. And here’s the worst news, there will be another incident, Corey.’”

Before Sunday night’s incident, Parker said he had tried a variety of punishments to get Trivino to be more responsible about drinking. He suspended him from the team in May of 2010, forced him to do extra workouts and asked him to consider treatment. None of the punishments worked, and so when Trivino had another alcohol-related incident last spring, Parker decided just to warn him instead of punishing him.

“The only thing you can do to help a kid with an alcohol problem is get him to stop drinking.”

Trivino was in accordance with team rules Sunday night as far as consuming alcohol is concerned. Players 21 years or older are allowed to drink on Saturday nights or on other designated nights as chosen by the coaching staff.

Parker said Sunday night was one of those specified nights because the team had just returned from a three-day road trip to play the University of New Hampshire and the University of Maine. Trivino registered two goals in the game against Maine, his final game in a BU sweater, marking the first time he had a multi-goal game in his BU career.

Parker spoke with the rest of his team about Trivino on Monday. He said they are “very upset” about losing Trivino, but knew it was the likely result of Trivino’s actions because the team was aware of the ultimatum Trivino faced.