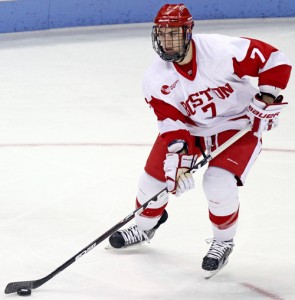 Saturday night at Agganis Arena, the No. 16 Boston University men’s hockey team took a different road but ended up at the same destination as it took on University of New Hampshire for the second time this season.

But a win is a win, and, thanks to a trio of third-period BU goals, it’s the third straight for the suddenly streaking Terriers.

“We were pretty thorough tonight, and I liked how hard we played from beginning to end,” said BU coach Jack Parker. “The score was not indicative of the game. It was really a close game . . . [UNH] kept coming at us and we made some pretty good defensive plays, and we had some pretty good puck luck at times too.”