Forward Chris Connolly was going to be the only returning captain next season from the 2010-11 Boston University men’s hockey team with co-captain Joe Pereira graduating and assistant captain David Warsofsky joining the pro ranks in the Boston Bruins system.

But as it turns out, Connolly, who will be one of five rising seniors along with forwards Corey Trivino and Kevin Gilroy and goalies Kieran Millan and Grant Rollheiser, was also named the only captain of next year’s squad as well. BU coach Jack Parker made the official announcement at Saturday’s Friends of Boston University Hockey Banquet. He did not name any assistant captains.

In the awards section of the evening, Millan took home the biggest prize in the George V. Brown Most Valuable Player Award. The junior netminder set a program record with 1,085 saves in 36 games last season and posted a 16-10-8 record to go along with a 2.68 goals-against average and .919 save percentage. The latter two stats were good for fourth in Hockey East. Millan had been previously named a Hockey East Player of the Year Runner-Up and conference Second Team All-Star. This was the eighth time in the last 12 years that a netminder was named Team MVP but was the first since John Curry won it in 2006-07 and Millan’s first such award.

Pereira, who was honored as one of two graduating seniors along with goalie Adam Kraus, became the first player in BU history to take home both the Bennett McInnis Award for Spirit and Albert Sidd Unsung Hero Award in consecutive seasons.

Here’s a breakdown of the remaining awards as well as a few other notes from Saturday’s banquet:

Ed Carpenter Award: Alex Chiasson
Given to team leader in scoring. . . The sophomore had 34 points on 14 goals and 20 assists last season. . . Was also a Hockey East Honorable Mention All-Star

Most Improved Player Award: Justin Courtnall
The sophomore went from a season in which he played 21 games without scoring a point to producing a line of 3-3—6 in 32 games played last season. . . Became a mainstay as the left wing on the very solid fourth line alongside Ben Rosen and a rotation of Kevin Gilroy and Ryan Santana. . . Award voted on by teammates.

Regina Eilberg Scholarship: Ryan Ruikka
Given to player “who combines the highest standards of Terrier athletics and academic performance”. . . Ruikka has the highest GPA of any junior or senior student-athlete at BU with a 3.82. . . The redshirt sophomore – or junior according by academic standards – has been on the Dean’s List each of the five semesters he’s been on campus. . . Played in 34 games after missing first two seasons with injury. . . Also won award back in 2008-09.

Clifford P. Fitzgerald Scholarship: Sean Escobedo
Given to outstanding rising junior or senior defenseman. . . Played in 36 games with a line of 1-5—6. . . Scored game-winner in Ice Breaker championship against University of Notre Dame on Oct. 10. . . Will join classmate Max Nicastro as only blue-liners with two years of ice experience next season.

Notes:
-It was announced that BU’s 2011-12 season opener will be played uncharacteristically against a conference foe: University of New Hampshire on Oct. 8

-The overarching theme of the night was looking forward to next year. After speaking about his two departing seniors, Parker noted, “The guys who are back are going to have to play better next year.” In his speech following the announcement of his captaincy, Connolly added, “We have high expectations. We would start tomorrow if we could. . . We’re really looking forward to October.”

-Parker talked at length about both departing seniors. On Kraus, he noted how great a team player the netminder was despite playing in just five games in his four-year career, saying, “Nobody could have been a better teammate and happier for Kieran than Adam was.” On Pereira, Parker noted that the forward had been “a pain in the ass to play against” and joked that he had also been “politicking” for a spot on the BU coaching staff following his graduation this spring. Below is the illustration handed out to guests celebrating the two seniors as well as team managers Whitney Delorey and Pat Walsh. 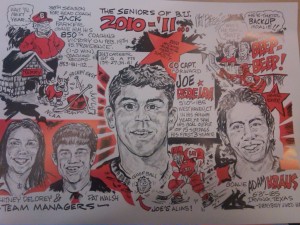