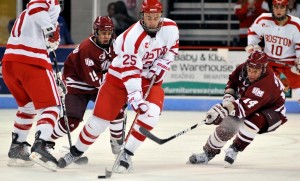 Photo by Sarah Gordon/DFP Staff
Offense: A
What’s not to like? Six goals, 37 shots, 18 grade-A chances. Particularly beastly was the Ross Gaudet-Nick Bonino-Joe Pereira line. Gaudet had two goals, Bonino had three assists to reach 100 points for his career and the trio was a combined plus-7 on the night. The Chris Connolly-Wade Megan-Vinny Saponari line combined for what Parker called the biggest goal of the game — Saponari’s power-play tally that came on a redirect of a Colby Cohen slapper just 1:06 after UMass had cut the lead to 3-1. Parker also mentioned that he thought the Zach Cohen-Corey Trivino-Alex Chiasson line played great even though they didn’t score because they were matched up against Casey Wellman and James Marcou most of the night and did a good job limiting their chances. That Minuteman duo finished a combined minus-6 in the game.
Defense: B
UMass actually outshot BU, firing 41 shots on net. Although a lot of those shots came from pretty far out, the Minutemen were still able to create plenty of chances against the Terrier D, recording 19 chances from grade-A areas. BU was pretty good against the initial rush, but struggled to clear the puck out of the zone at times and was bailed out by Kieran Millan on a number of occasions. Parker did say that he thought Kevin Shattenkirk, Eric Gryba and David Warsofsky all had solid games. For forwards, Parker said that he thought Trivino was particularly impressive defending against the Wellman line, saying that he’s “becoming real solid as a defensive centerman.”
Special Teams: B+
The special teams numbers for BU probably look a little better than they actually were — 2-for-5 on the PP while holding UMass to a 1-for-4 showing. The Terriers only had five shots in their five chances, though, while the Minutemen had 10 in their four. The Terriers struggled to get in the zone and get set up throughout the night, but when they did, they did a great job of getting traffic in front, resulting in two goals. Saponari was in perfect position to get a stick on Colby Cohen’s slapper late in the second, and Paul Dainton never even saw Max Nicastro’s slapper from the point late in the third.
Goaltending: A-
As mentioned above, Millan bailed out his defense time and again Friday night, making 39 saves in the game. He was great stopping first shots, as he was constantly squared up to the shooter, but he gave up a lot of big rebounds. Just like Millan saved the defense a number of times, the defense helped him out several times, too, including when Nicastro blocked Marcou’s shot at an empty net midway through the first to preserve a 0-0 game. Brian Keane’s goal to make it 3-1, though, was a direct result of a juicy rebound. There wasn’t a whole lot Millan could’ve done about UMass’ second goal, though. Martin Nolet banged home a loose puck in the crease after the BU D struggled to clear the puck and bodies away.
X-Factor: Keeping the foot on the gas
When the Terriers got up 3-0, it looked like they let up a little, allowing UMass to answer just 36 seconds later. But BU didn’t sit back after that, as Saponari answered right back to regain the three-goal lead. The Terriers didn’t relax or get conservative after the Minutemen cut it to 4-2 midway through the third, either. Instead, they scored the game’s final two goals, drawing two penalties on UMass in the process, to choke the breath out of the Minutemen’s comeback bid. BU has been the second-worst team in Hockey East in the third period this season, often letting teams back into games it was leading or letting teams pull away in games it was trailing, but the Terriers didn’t let up at all in the third Friday night.