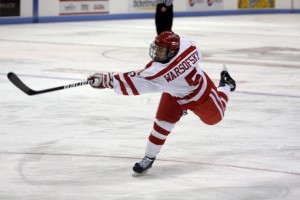 Despite getting shorthanded tallies from juniors Nick Bonino and Kevin Shattenkirk, the Boston University men’s hockey team blew a third-period lead to Rensselaer Polytechnic Institute Friday night on the way to a 5-3 loss.

BU (4-9-3) entered the third with a 3-2 lead, but consecutive goals by seniors Erik Burgdoerfer and Christian Jensen midway through the third gave RPI (9-9-1) the lead. Junior Tyler Helfrich added an empty-netter with 53.9 seconds left to seal the deal for the Engineers.

Burgdoerfer tied the game at 3 just before the 10-minute mark of the third. With a delayed penalty coming on senior Eric Gryba for hitting Joel Malchuck from behind, RPI sophomore Patrick Cullen found Burgdoerfer at the right doorstep, who lifted a shot past BU netminder Kieran Millan.

Jensen netted the game-winning goal with about six minutes left after freshman Brandon Pirri fired wide of the net from center point. The puck bounced off the boards behind the cage and found its way to Jensen atop the crease.

Jensen threw one shot off Millan, then put his own rebound back at net. The put-back weaved its way through a jungle of sticks and skates sliding into the back of the cage. Jensen described the goal as a “greasy one.”

BU jumped to an early lead just two minutes into the game with a shorthanded goal. Fighting an aggressive BU forecheck, RPI netminder Bryce Merriam tried to clear the puck up the left boards, but his attempt ended up on junior Kevin Shattenkirk’s stick at the right point.

With RPI in full breakout mode, Shattenkirk had an open lane to sophomore Chris Connolly, positioned just inside the left faceoff dot. Connolly hesitated momentarily before passing to junior Nick Bonino atop the right side of the crease. Bonino one-timed Connolly’s pass under the crossbar for the shorthanded finish and Bonino’s fourth goal of the season.

The Terriers’ early lead was short lived. Just over two minutes after Bonino’s tally, RPI freshman Brandon Pirri wheeled behind the BU cage and backhanded a pass to a charging Alex Angers-Goulet from the left post to the top-right corner of the crease. Angers-Goulet beat both the BU defender and Millan to the puck and pushed his third goal of the year across the red line.

Just 19 seconds later, a defensive breakdown left RPI defenseman Bryan Brutlag with an open lane from the right halfwall all the way to the BU cage. The junior skated along the circumference of the right side circle to Millan’s front porch, where he beat the sophomore goalie five-hole to put RPI up, 2-1.

The BU power play came up with the equalizer 3:10 into the second period as freshman Max Nicastro rifled a wrist shot from the right point. The shot deflected off Malchuck in the slot, then again off BU senior Zach Cohen atop the crease before working its way around Merriam and into the cage. Cohen was credited with the goal, his sixth of the season.

With the game tied at 2 in the second period, the BU penalty kill again went on the offensive, with Shattenkirk converting on a 2-on-1 rush with sophomore Ross Gaudet. Shattenkirk rushed the puck up the ice on the right wing before slowing in the slot and faking a pass to Gaudet. The fake froze Merriam momentarily, and BU’s captain lifted a wrister into the window between Merriam’s left shoulder and the crossbar to put BU ahead. It was Shattenkirk’s third goal of the year.

The loss comes at the end of what has been a disastrous first half for the defending national champions, which has been lowlighted by a number of blown third-period leads.

With a three-week break next on BU’s schedule, Shattenkirk thinks time away from the rink might be the remedy for the Terriers’ woes.

“We need to just cool off and just think about things over break from a coaching standpoint and from our standpoint as players,” Shattenkirk said. “It’s gonna be good to rest for a little bit and not have to worry about hockey.”

“I don’t think there’s any question we need a break,” Parker said. “I was hoping we’d get a break with a ‘W’ tonight –– didn’t happen. It’s a long break to have this one be the last game.”

Kibbles and Bits:
After being called for holding in the second period, Gryba was awarded a 10-minute misconduct penalty. The 12 penalty minutes gave Gryba 295 career minutes in the sin bin, enough to eclipse Freddy Meyer’s all-time mark for penalty minutes accrued by a Terrier . . . Junior Colby Cohen was a healthy scratch for the Terriers Friday . . . RPI is the only team in the country to make multiple visits to Agganis Arena and remain undefeated at ‘The Greek.’