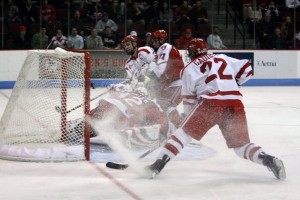 The good news is that the Terriers killed all six Rensselaer power plays, holding the Engineers to just three shots while scoring two shorthanded goals. The bad news is that five of those kills came in a 17:31 stretch from the 8:13 mark of the second to the 5:44 mark of the third, and that the Terriers were without senior defenseman Eric Gryba for 10 of those minutes due to a misconduct.

At the end of that span, BU was exhausted. That –– combined with the Terriers being “afraid to lose,” according to coach Jack Parker –– allowed RPI to take the game and run with it. The Engineers potted two even-strength goals in a four-minute span midway through the third to take the lead, and the Terriers were never able to recover.

“We self-destructed in the second period with all the penalties we took,” Parker said. “We wound up with Gryba in the box for 10 minutes, plus his two [for a holding minor]. We wore out Shattenkirk and Warsofsky and Escobedo and Nicastro killing penalties. And they were really legless in the third period, I thought.”

The devastating string of penalties began when Gryba got called for holding, and then picked up an additional 10 minutes in the sin bin for unsportsmanlike conduct.

Junior defenseman and captain Kevin Shattenkirk seemingly shifted the momentum back to BU during that kill when he roofed a shorthanded goal to give BU a 3-2 lead. But just 27 seconds after junior forward Victor Saponari was done serving Gryba’s minor, freshman defenseman Sean Escobedo was sent off for contact to the head roughing.

If that wasn’t enough, sophomore forward Chris Connolly added his own interference minor to the list three minutes after Saponari got out.

“Undisciplined play,” Parker answered when asked what caused his team to take so many penalties in succession. “Stupid play.”

Sometimes, killing a string of penalties can swing the momentum in that team’s favor, and give them a boost once they’re back to even strength. On Friday night, though, that didn’t happen for the Terriers, thanks in large part to the fact that they were simply too tired to come out flying.

“Once we get all those penalties,” Shattenkirk said, “and we’re sending out the same guys over and over again, especially in the second period, it definitely kills your energy, not only from a physical standpoint, but mental as well.”

Shattenkirk, however, was also quick to say that the team can’t use that as an excuse for the way they performed at even strength for the rest of the game.