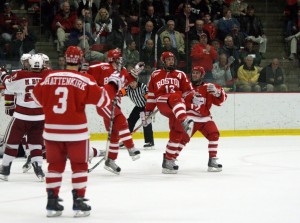 The Boston University men’s hockey team fell behind 2-1, 3-2, 4-3 and 5-4 on Tuesday night, but senior forward Zach Cohen’s goal with 19.5 seconds remaining in regulation tied the score at five, and sophomore forward Chris Connolly provided the heroics with the game-winning goal in overtime, giving BU a thrilling 6-5 victory over Harvard University at Bright Hockey Center.

“Overall, it was an unbelievably exciting hockey game,” BU coach Jack Parker said. “I was looking at the shots we were getting, and when we scored the winning goal I said to [assistant coach] Mike Bavis, ‘I wish we’d gotten one more shot so we could have gotten the winner on the 50th shot instead of the 49th.’

In the first period, a tripping penalty was called on Harvard’s Louis Leblanc at the 2:19 mark, and 94 seconds later, the Terriers (4-7-1) took the early 1-0 lead on junior forward Joe Pereira’s power-play goal at 3:53 in the first stanza. It was the West Haven, Conn. native’s second goal of the season, and his first since he scored BU’s third goal in its 3-2 win over the University of Michigan back on Oct. 24.

The Crimson (1-5-2) responded six minutes later on freshman forward Conor Morrison’s first of four goals on the night. BU freshman Max Nicastro tried to clear the puck from behind the team’s own net, but it went off the referee’s skate, and to Harvard’s luck, it landed right in the slot where Morrison put it away, tying the score at one.

“It looked like the referee kicked it for crying out loud,” Parker said. “So, that was a bad break for everybody involved, but I wouldn’t call that a turnover.”

Harvard took its first lead of the game at 13:09 in the first period. BU turned the puck over in its own defensive end, and the puck popped right up to sophomore forward Alex Killorn, who swatted it in mid-air towards the net, where sophomore goaltender Kieran Millan (21 saves) completely misplayed the puck, letting it go off his blocker and into the net, giving the Crimson a 2-1 lead.

“I think Kieran has been up and down,” Parker said of Millan’s play this season. “I don’t think he has been nearly as sharp as he was for us last year. I wish he had one of those goals back.”

With 3:28 remaining in the first period, Zach Cohen tied the game at two apiece with his fourth goal of the season, assisted on the power play by sophomore forward Vinny Saponari and sophomore defenseman David Warsofsky.

Morrison scored his second goal early in the second period, but at the six-minute mark a Harvard player was called for holding, and Pereira (2 goals, 1 assist) netted his team’s third power-play goal of the night and his second of the game 34 seconds later, tying the game 3-3.

“He’s been playing really, really well,” Parker said of Pereira’s play. “He gives that line so much energy, gives [junior Nick] Bonino so much energy. And the fact that Bonino had him on his right wing and he also had Connolly back on his left wing gave him some more people to make some plays with.

“It was a great game for Joey. It’s great to see him rewarded because he works so hard, and he hardly ever plays the power play for us, but he did a great job tonight.”

“I’m trying to hope they keep me on the power play, but I don’t think so,” Pereira said. “I’m just happy that we won, and I’m happy that I got to contribute to the team today. Wherever they play me, it doesn’t matter. I’m just trying to help the team win.”

The two teams traded goals in the third period, with Harvard taking 4-3 and 5-4 leads only to have BU come back and equalize the score both times, with Cohen’s goal at the 19:41 mark being the most dramatic and sending the game to overtime.

“It shows a lot of character to be able to come back and to never get down and be resilient enough to get that win in overtime,” Connolly said.

“I think it was huge [getting the win the way we did], especially after what happened yesterday at practice,” Pereira said. “We had a stinker, and Coach went off on us a little bit. We had a talk, 26 hockey players, coming together as a team and trying to play a full game. We kind of kept the coaches out of it and played for each other tonight and that helped a lot.”

“This is the best game we’ve had since the Northeastern game,” Parker said. “I thought we played great, and we lost 1-0. This night, we played real well and we won.”