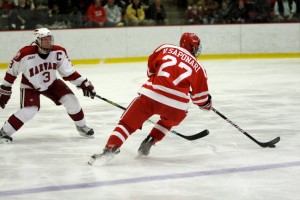 Hard work. Grit. Determination. These things don’t show up in box scores. They don’t need to. It doesn’t take a hockey expert to know when they’re present and when they’re not.

For most of the Boston University men’s hockey team’s 2009-10 season, these intangibles haven’t been there. In Tuesday night’s 6-5 overtime victory at Harvard University, however, the Terriers put these characteristics on full display for all 3,076 Bright Hockey Center patrons to witness.

For almost all of the game’s 62-plus minutes, the Terriers battled along the boards to move pucks, grinded in the corners to keep plays alive and won races to loose pucks to create chances.

It was this constant perseverance that enabled BU to come from behind four different times to tie the game, culminating in senior forward Zach Cohen’s overtime-forcing goal with just 19.5 seconds left in regulation.

The Terriers displayed a conviction to win and an unwillingness to lose that fans, media and coaches had yet to see from this year’s squad. That lack of drive and desire that had previously plagued the team was perhaps never more evident than during a lackluster practice on Monday that ended with BU coach Jack Parker lashing out at his players with a level of fire and intensity he rarely reaches nowadays.

“Yesterday, we had a tough practice,” sophomore forward Chris Connolly, who netted the game-winning goal, said. “We weren’t very focused. We weren’t very sharp. And we knew that. It was do or die coming into tonight. We needed to change our attitude, or something bad was going to happen. So, we decided to buckle down and come in with the right mentality tonight.

Cohen (2 goals) and Saponari (2 assists), wingers on the Corey Trivino-centered second line, consistently won 1-on-1 battles by using their big frames and physicality to fend off Harvard defenders. Cohen scored both of his goals by parking himself in front of the Crimson net and refusing to budge. Saponari’s two assists came from him outworking the opposition down low and moving the puck back to the point.

Saponari also made the lunch-pail play of the game in the third period when he single-handedly kept the puck in the offensive zone while four other Terriers changed off, ultimately leading to a scoring chance for sophomore forward Ross Gaudet.

“They’re two pretty big bodies, and they can move around and protect the puck and get to people,” Parker said of Cohen and Saponari. “They could always protect the puck, but when the puck moves, they were kind of lackadaisical getting to the next guy. But tonight, they were determined to go get it again, and I think they made some very nice plays on the puck.”

Pereira, whose 5-foot-10 stature doesn’t quite match up to that of Cohen or Saponari, made his impact with speed and hustle. “Bulldog” tallied a career-high two goals (both on the power play) and four points in his return to the top line. Both of his goals were the result of him getting to rebounds quicker than any Harvard defender. One of his assists was the direct result of a valiant wraparound attempt that left a juicy rebound for junior forward Nick Bonino to deposit.

“He’s been playing really well lately,” Parker said of Pereira. “He gives that line so much energy, gives Bonino so much energy . . . I think it was a great game for Joey. It’s great to see him rewarded, because he works so hard. He hardly ever plays the power play for us, but he did a great job tonight.”

“I think we showed a lot of character tonight,” Pereira said. “Before, a lot of times people were waiting for something bad to happen. I think tonight, we kind of dug deep and responded every time. We kind of just said, ‘We’re gonna start over. We’re gonna start zero-zero, and just play from here.’”