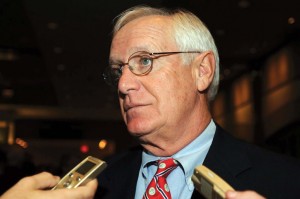 Despite losing five of its eight top scorers and its top defensive pairing, the 2009-10 version of the Boston University men’s hockey team is still the team to beat in Hockey East, according to the conference’s coaches.

permitted to vote for his own team. The other four first-place votes were split evenly between the University of Massachusetts-Lowell and Boston College.

Lowell, who the Terriers defeated, 1-0, in the Hockey East Tournament finals, took the second spot in the coaches poll. The Riverhawks return nearly their entire starting roster from a year ago, including their top-seven scorers and 84 percent of their total scoring from 2008-09.

Parker, for one, thinks Lowell’s ranking is very well deserved.

“I picked them the number one team,” Parker said. “They have almost everybody back and I think they have something like [12] seniors on their club. They had a great second half last year including almost knocking us off, knocking Northeastern off –– knocking them out in the playoffs. They had a terrific second half of the year and they’re ready to win something big.”

While earning the top spot is a sign of respect for the Terriers, it doesn’t necessarily change BU’s outlook heading into the season, according to Parker.

“I don’t think anybody’s worried about having a target on our back,” he said. “After our first game at [the University of Massachusetts-Amherst], things will be different. . .You start earning points this year when you start playing real games.”

The Athletic Department’s announcement that the raising of championship banner for the 2008-09 team would take place on Oct. 10 against the US National Under-18 squad has stirred a bit of controversy in Terrier Nation.

It was initially announced that the ceremony would take place before the Oct. 20 regular-season home opener against the No. 5 University of Notre Dame. The move means the ceremony will instead occur before a preseason game, and not before the nationally-televised Notre Dame game –– the game will be broadcast on ESPNU.

The decision to move the raising was made by Parker himself, despite concerns from some of the BU fan base, because the coach thought the move would help avoid any distractions created by reminders of last year’s title campaign

“I wanted to get rid of last year, and we would have already played a regular season game against UMass, so that was a difficult situation,” Parker said. “We wanted to get all the fanfare about that our of the way before we played an actual game. And we do have a couple of big recruits we’re recruiting on the national team, and it’ll be nice to have them in the building while we’re doing that.

“I know there were people upset with me on that because they had made plans to go away that weekend, but the banners will still be there when they come back.”