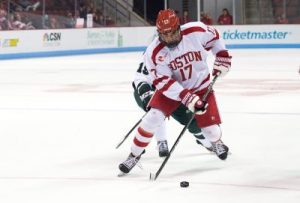 With two games of Group B play wrapped up, representatives of the Boston University men’s hockey team have continued to shine at the 2017 World Junior Championships.

On Tuesday night, freshman defenseman Dante Fabbro helped Canada to a 5-0 win over Slovakia. He didn’t register a goal or assist, but was a steadying presence along the blueline during 18:07 of time on ice, the second highest total for the Canadians.

The Americans, fresh off a convincing win over Latvia, then played the same Slovakian side on Wednesday evening, beating them 5-2. And, as was the case against the Latvians, Terriers stole the show at time, chipping in on three of the red, white and blue’s five goals.

Freshman forward Clayton Keller turned generous on USA’s second tally, flipping a saucer pass to Colin White, a Boston College forward, for a backdoor finish. Then, to make it a 3-1 game, freshman forward Kieffer Bellows found Tage Thompson of UConn on the doorstep, who deposited with grace atop the crease.

The grandest moment of the game, from a BU perspective, came midway through the second period when sophomore defenseman Charlie McAvoy fired a howitzer of a one-timer. McAvoy, who is serving as an assistant captain for the Americans, beat netminder Matej Tomek, normally of North Dakota.

Looking ahead, Fabbro and the Canadians next take on Latvia at 8 p.m. on Thursday. On the same day, the Americans will look to beat Russia when it faces the nation at 3:30 p.m.

WATCH the highlights of Team @USAHockey beating Slovakia and taking the lead in the Toronto group of the #WorldJuniors. pic.twitter.com/Vy1GxdUxOA

.@TerrierHockey Has scored or assisted seven of Team USA's 11 goals at the WJCs

Clayton Keller with some mild sauce to set up Colin White for USA pic.twitter.com/LIJIuyFt2a